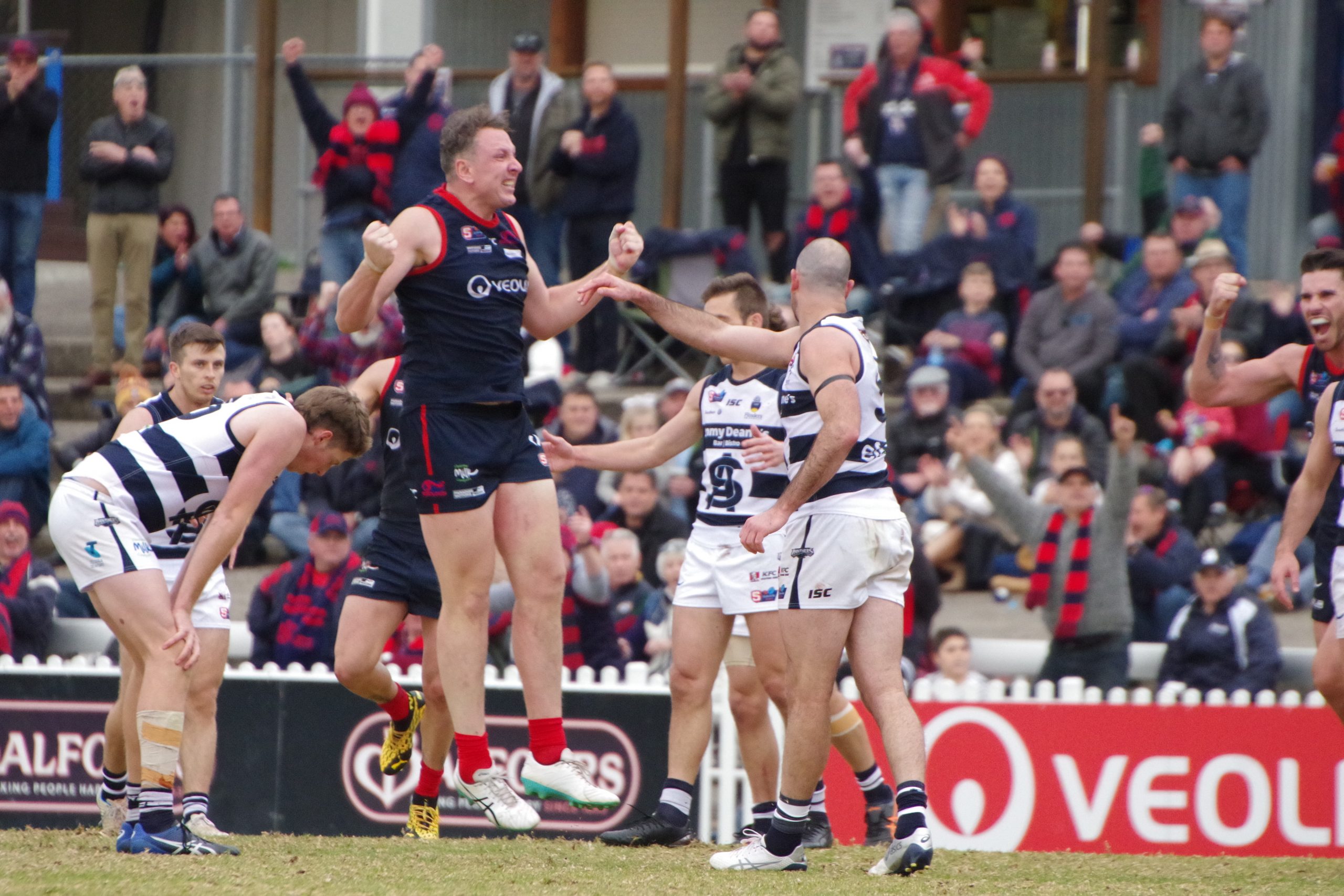 Norwood hung tough to edge out South Adelaide by just three points in a see-sawing thriller at The Parade on Sunday.

Forcing their way back into the top four with the vital premiership points, the Redlegs survived after the Panthers missed three shots on goal during time-on of the fourth term in a highly entertaining battle.

Jarrod Cotton’s side appeared headed for victory when it opened up an 11-point lead, two minutes into the final quarter.

Speedy Anthony Wilson made the most of his one-two combination with Mitch Grigg to unselfishly centre the ball to Dom Barry, who finished off his chest mark with a 40m set shot in front.

But just as they had done all afternoon, South fought back when Beau McCreery put the ball deep to the top of the square for Liam Fitt to convert his mark with his third major.

Star South veteran Matthew Broadbent, who finished with 22 disposals and eight marks, then put his side back in front with a brilliant piece of individual play.

After narrowly missing a spoil on a courageous Mitch Grigg mark, the former Power defender bounced to his feet, blocked Grigg’s handball and then caught Redleg Richard Douglas holding the ball.

Broadbent then nailed his 50m set shot from directly in front to put the Panthers one point in front, nearly eight minutes into the final half-an-hour.

Former Panther Emmanuel Irra, facing his old side for the first time as a Redleg, then kicked a floating pass to teammate Tom Pinyon, who marked low to the ground before kicking his 30m set shot.

Norwood retained the lead for the next six minutes until Meadows FC product Eamon Wilkinson edged the visitors one point ahead with his fine finish on the run after accepting a handball from McCreery.

Redlegs’ vice-captain Sam Baulderstone was determined to make up for an earlier missed set shot though, with the premiership ruckman using his strength nicely in the goal square to tap the ball to himself and put the hosts back in front by five points nearing time-on.

It was to be the last goal of the game as South then missed the next three shots on goal in succession to trim the margin to two points before behinds to Norwood’s Peter Bampton and Mitch Wilkins left the door ajar nearly 29 minutes into the last term.

The Panthers made one last charge when Richard Douglas conceded a 25m penalty to Ben Heaslip on the wing with little more than 20 seconds left on the clock.

But as Heaslip’s pass found its way inside 50m to a leading McCreery, the final siren sounded much to the relief of the vocal Redlegs fans in attendance.

Norwood dominated the majority of the key statistic categories, having 50 more kicks, 37 more handballs and 38 more marks to go with a 44-24 advantage in hit outs and 38-31 lead in clearances.

Baulderstone again enjoyed another monster performance to finish with 23 disposals, 11 clearances, seven tackles and 42 hit outs to go with his match-winning goal.

Lewis Johnston was again a steady hand in defence alongside Brad McKenzie and Cam Shenton while Josh Richards was unassuming in collecting 22 disposals.

The Redlegs will assess the extent of Declan Hamilton’s ankle injury suffered in the first term, which forced the former Western Bulldogs into a moon boon and on crutches by the final siren.

South should take plenty of positives, in particular its efficiency in moving the ball forward to engineer 17 more inside 50 entries despite having much less of the ball.

Joseph Haines was outstanding again for the Panthers in defence, racking up 25 disposals and six marks while Broadbent and emerging wingman Reece Milsom also topped the 20-disposal barrier.