The Norwood Football Club extends its sincere sympathies along with our thoughts and prayers to the Gallagher family after the sad passing of former Norwood player, Sam Gallagher.

In 1942 Gallagher joined the Norwood Colts and played as a centreman/half-forward, before joining the Royal Australian Air Force.

Gallagher trained with Norwood in 1945 after being discharged from the RAAF. He impressed captain-coach Jack Oatey and was only 19 years old when he made his league debut as a wingman against North Adelaide. He played four games in his debut season.

Leg trouble forced Gallagher to miss a major part of the 1946 season and he only managed to play nine games for the year. He had both his legs in plaster for a five-week period but was able to return in time to play in the finals. Gallagher was on a wing in Norwood’s Grand Final victory against Port Adelaide.

In 1947, Gallagher represented South Australia in the Australian National Football Carnival held in Hobart. He made 16 appearances in the Norwood side that was eventually beaten in the Grand Final by West Adelaide. His efforts during the year were recognised with a meritorious service award.

He played 12 matches in 1948 and was brilliant in the centre against West Torrens in the 1948 Grand Final. Gallagher also represented his State against Victoria in Adelaide and Melbourne. The following year he won the brilliant play trophy after appearing in 15 games.

Gallagher won the same award in 1950 (13 games). Although chosen for the 1950 Brisbane carnival he had to withdraw due to injury. He later played for a South Australian second 18 against Richmond. Selected on a wing, he was high in Norwood’s best players in its Grand Final victory against Glenelg.

He was named on a wing for South Australia in its 17 point victory over Victoria on the Adelaide Oval in 1952.

Gallagher played his 100th league game for the Redlegs against Port Adelaide on May 9, 1953 on the Alberton Oval. Norwood won the clash 12.13 to 10.16, with Gallagher one of the best players on the ground playing on a wing and in the centre. He was named in the centre for the match against North Adelaide on the Sydney Cricket Ground on 13 June 1953; a rare SANFL fixture played interstate for premiership points. Once again he was named the club’s most brilliant player for the year(14 games).

In 1954, he was awarded life membership of the club after 10 years excellent service. As had become customary, he also took out the brilliant player award, despite only playing 11 games.

His last league appearance for Norwood was in the 1955 Grand Final. Fittingly, he ended his career by being named the brilliant player of 1955 with only nine appearances.

Sam will be missed by all who were touched by his care. 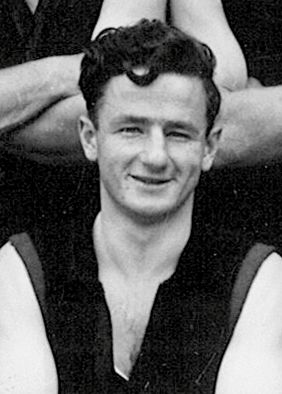