The Norwood Football Club has a proud record of notable performances against local and interstate clubs in night games played at the Norwood Oval.

Some of Norwood’s most memorable home victories occurred under lights at The Parade in the 1970s:

Perhaps not as well known are the early days of night football in the SANFL and Norwood’s successes in 1956 and 1958.

Floodlights were erected in 1951 at the southern end of the ground and in October 1952 and January 1953 additional light towers were added to provide improved lighting across the whole playing surface.

On October 23, 1953, Norwood played arch-rivals Port Adelaide in a trial under the Norwood Oval floodlights in what is thought to be the first senior football match played under lights after World War II.

Norwood were defeated by four points, but the night was a huge success with an official crowd of 8,500 attending the fundraiser. Among the Redlegs, best were Bob Fosdike and Peter Vivian (4 goals). It proved to be a great spectacle and showed that the game could be played under lights.

Night football had captured the imagination of the public. The proceeds of 773 pounds ($1546) aided the Norwood RSL building fund. Later in the year work began on the Centenary Pavilion (western stand) and a new light tower was erected.

In 1954 the SANFL arranged the first night series on the ground at the end of the season when a white football was also used for the first time. The teams which finished outside the final four were to play a knockout series and as an added incentive, the winner would then play VFL club South Melbourne with proceeds shared equally by the two clubs. Sturt was the inaugural winner of the night competition and their match against the Swans drew a crowd of 10,500. 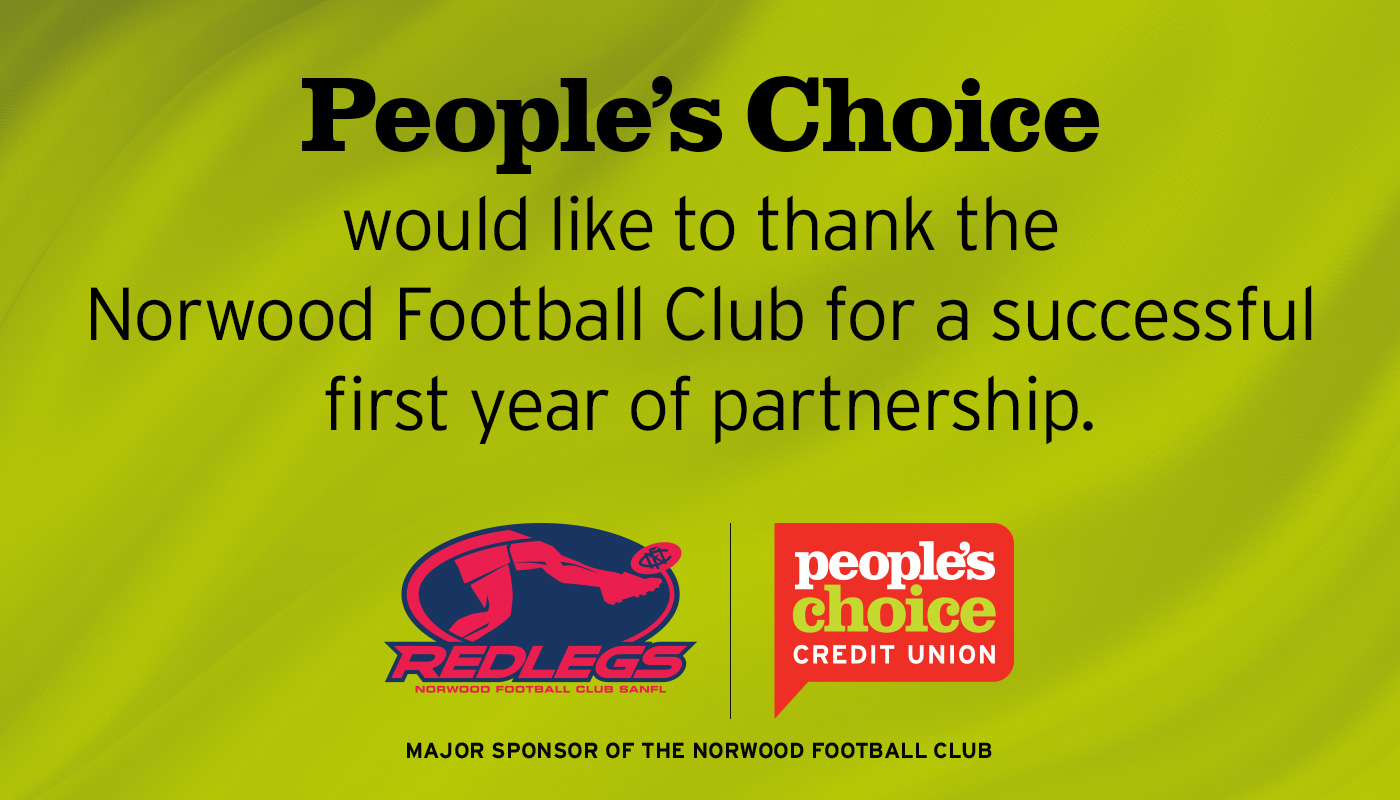 While Norwood did not participate in the competition it again played Port Adelaide at an end of season charity night match. On October 15 1954, in front of a crowd of almost 8,000, Norwood 15.12 defeated Port Adelaide 11.9. Norwood best players: Norm Walker, Bob Williams, Brian Wells, Brian Sawley, Doug Young and Fosdike. Proceeds helped fund the proposed Mothers and Babies’ Health Association Centre and the War Memorial Gardens at the corner of Woods Street and The Parade.

In 1954 and 1955 the competition had only been contested between clubs not involved in the SANFL finals, but the format was to change several times and in 1957 the competition became known as The Advertiser Cup.

Norwood played in the competition for the first time in 1956 and defeated South Adelaide in the grand final by 50 points. Better players included Ron Reimann, Peter Aish, Fosdike, Horrie Nelson, Vivian, Graham Nicholls, Doug Olds and Pat Hall (4 goals). South Adelaide had been the winner of the knockout series between the SANFL non-finalists. However, Norwood were able to challenge South Adelaide in the final after the Redlegs lost the SANFL first semi-final to North Adelaide.  Norwood then defeated Carlton in an interstate challenge match the following week in front of 10,500 spectators. Nicholls, Peter Koerner, Fosdike, John Marriott, Eric Butler and Aish all played well.

Norwood won its second-night title in 1958. South Adelaide had again been the winner of the knockout series between the non-finalists and Norwood had, on this occasion, been beaten by Port Adelaide in the first semi-final. The Redlegs won the cup after again challenging South Adelaide. Final scores: Norwood 13.15 to South Adelaide 12.15. A snap from captain-coach Haydn Bunton late in the game secured the victory. Best players for the Redlegs were Aish, Nicholls, Bunton (3 goals), Sawley (3 goals), Peter Minervini, Harley Swanbury, and Walker (4 goals).

The Redlegs were narrowly defeated by Geelong the following week in the interstate challenge match in front of a big crowd at the Norwood Oval. The award for best on ground, presented by the Geelong Football Club, was won by Eric Butler.

By the time the series was suspended in 1962, it had become a pre-season knockout competition with all eight league teams involved – as well as Central District and Woodville who, at the time, had teams playing in the SANFL reserves competition.

Footnote: Norwood is one of the league clubs that does not recognise ‘cup’ games played before 1961 as senior games and as a result, these matches are not included in players’ career totals, although Escort, Foundation and Foxtel Cup games are included.

Early games played by Norwood under lights at Norwood Oval: